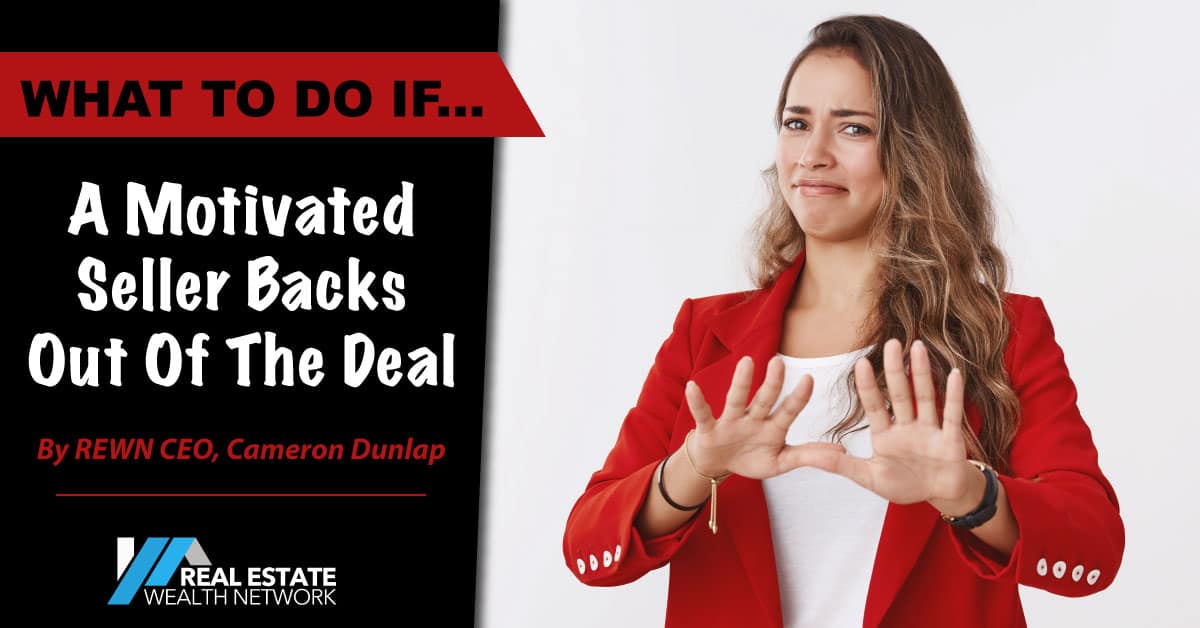 I’ve received many questions from students I’m mentoring about what to do if a motivated seller backs out of a deal.

Today, I’m sharing an interesting and difficult situation that happened to one of those clients. We’ll call him Oliver. He asked:

“I had a contract with a few sellers where the seller received higher offers after we agreed on a price. Do I file a notice of intent with the courthouse to prevent the sale of the house to the other buyer or just find another deal?”

So, if you have a written contract with a seller and it was signed by all parties… and the seller then agreed to sell to someone else for any other reason (in this case, another buyer offering more) — Oliver absolutely has the right to pursue what’s called “specific performance.”

I’m going to say there’s about a 98% chance that language is in your agreement. Specific performance is in most real estate contracts.

The way it’s worded is that the buyer is held accountable to the extent of their earnest money deposit. Meaning, if they bail on the deal, they lose their deposit and that’s the end of it. And most real estate contracts also say that the seller is obliged to act according to the terms of the contract… to the extent that the buyer can sue them to perform specifically as stated in the contract — thus the term specific performance.

Motivated Seller Backs Out – Time To Make Your Move

So, Oliver could hire an attorney and file a lawsuit. Or, he could do what he suggested, which is to record the Affidavit and Memorandum of Agreement Concerning Real Estate.

That’s a pretty common document. And what that will do is cloud the seller’s title, and it should prevent the closing agent, attorney or title company from facilitating the transfer of title from that seller to another buyer.

What will happen is, during the title examination, the closing agent will see that document and know that there’s now a title issue here that will need to be cleaned up. They’ll see that Oliver had an agreement to buy the house.

Then, Oliver is going to get a call — might be the closing agent, might be the seller — and they’re going to say, “Ok, we did have a deal. So what’s it going to take for you to release this?”

Now Oliver does some math. He’s thinking he was going to wholesale the deal and make about $18,000 bucks on it. So, that’s what it’s going to cost the seller to get out of the agreement. $18k to release it. Or, if the seller prefers, they can sell the house to Oliver as originally agreed to.

Either Way, You Are In The Driver’s Seat.

Oliver needs to be sure that before he records the affidavit, he does in fact have a written contract signed by the seller and that it is in force and has not expired. If not, he might end up being on the short end of the stick… accused of Slander of Title.

So, I suggest you be extra careful and write in the addenda section of the purchase and sale agreement you’re using:

Evidence of this agreement may be recorded on the public record.

That’s language an attorney gave me years ago. I suggest you ask your own attorney about this and for language to use because, after all, I’m not an attorney and am not offering legal advice here.

Then What Happens Is…

If you record the affidavit and the seller or their council says, “Whoa, not cool,” you’ll say, “Well, look right there, see what it says: Evidence of this agreement may be recorded on the public record. And that’s what I’ve done. I did that because I was concerned you might welch on me… and, it seems you have.”

Basically, using that language and recording the document is kind of playing hardball. But if you’re concerned about the seller welching, it’s a powerful tool in getting them to do what they said they would do.

(True Story) Motivated Seller Backs Out On ME!

Before I wrap this up, I want to share a little anecdote on this topic. It’s kind of nuts, actually…

So, I recorded the affidavit…

I recorded it 17 years ago.

And still, to this day, the house is not sold. It’s 17 years later and the affidavit is still sitting on that title. Obviously, I never pressed the issue because I was and remain too busy but I figure eventually something will happen.

Told you it was nuts.

So, one way to protect yourself when a motivated seller backs out is to make sure that specific performance language is included in your contract, and then record the affidavit. But be careful and do it with good local council.

(Your Take) Motivated Seller Backs Out On YOU?

Have you ever dealt with a motivated seller backing out of a deal? How did you handle it? Let me know in the comments!

And if you have questions similar to Oliver’s, I meet twice monthly with my Inner Circle students covering topics JUST like this and more during my LIVE Deal Maker Webinars. You can click here if you’d like to sign up and join us for the next one.

Question last year.2020 I had a signed contract with a realtor I found the deal on Zillow. Its in Shreveport La I live in Arlington Texas 3hr drive no problem. Priced at $47K the signed a contract to sell at $33K. After I got the inspection I applied for the loan, While waiting for the contract to supply the cost of repairs for the lend, My realtor ask for a copy of the inspection. I gave it too her. 5 days later she buzzing like crazy to close within the nx 5 days. she goes dark for 2 weeks and said another investor offer more and the seller accepted. SHE was the other investor. Can I do anything I still have the e signed contract from her?

I’m not an attorney, so take this as one investor’s opinion.

Either way a conversation with a local attorney is warranted in my opinion. 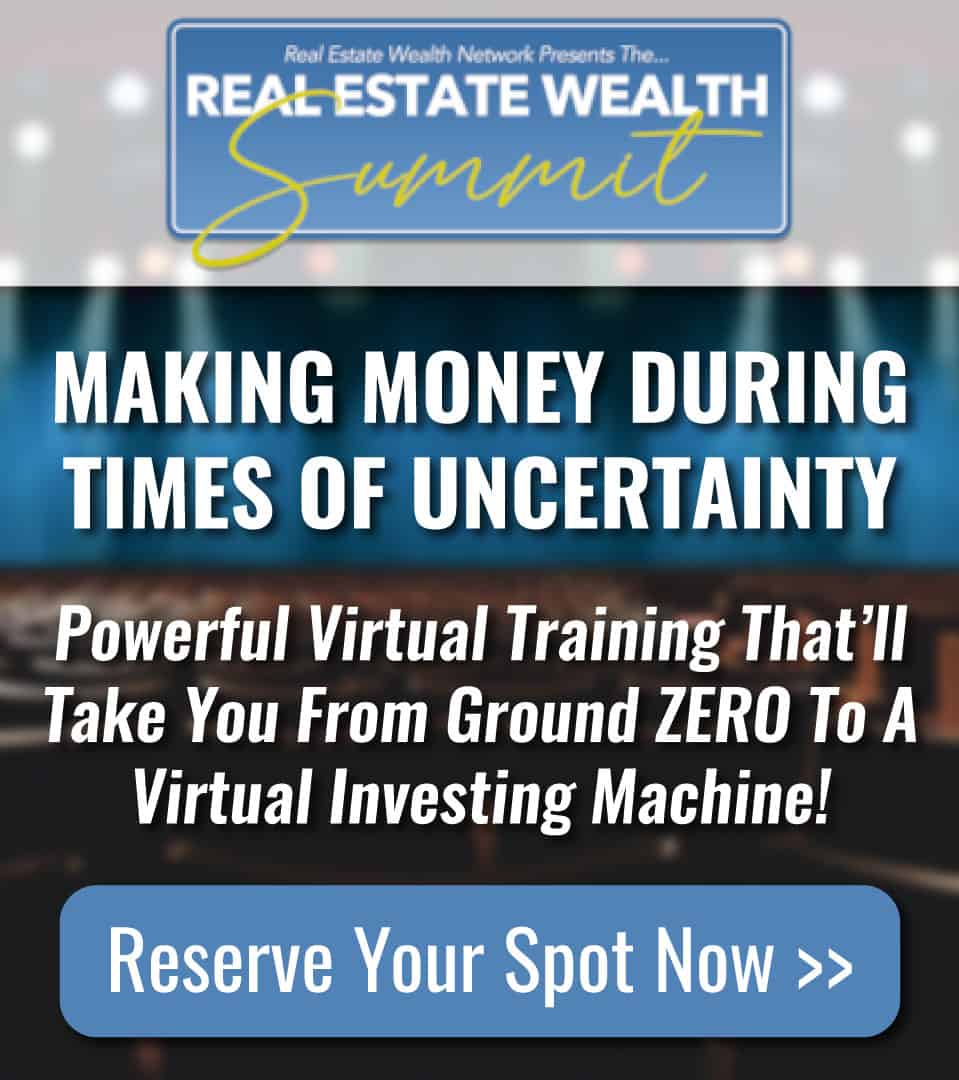